The Timed Email Organizer add-in keeps your Inbox neat and tidy by organizing emails using rules. These rules aren’t associated with Outlook rules, and you can even test out your rules before implementing them.

According to a study by The Radicati Group, the average number of emails sent and received by business workers is 100.5 and that number is expected to grow. How will you manage that tide of information? You need an email organizer to help you with routing, categorizing and taking care of stale emails.

The Outlook Timed Email Organizer add-in keeps your inbox neat and tidy by automatically organizing emails based on who it’s from, subject, how old it is (among many other conditions).

The email sorting software mimics some of the most popular Outlook rule functionality. For instance, you can run rules on emails that:

However unlike Outlook rules, you can also run rules on emails that:

What can you do with the emails once you’ve identified them? Here at Sperry Software, we’ve done research to find out the most common types of actions. With this Outlook Timed Email Organizer add-in, you can:

As you can imagine, combining the conditions for this email organizer software gives you a powerful mechanism for staying organized.

It’s easy to see how this Outlook Timed Email Organizer add-in can be a weapon against the deluge of emails that arrive in your inbox.

Note that unlike our Power Rules Manager this add-in does not use Outlook rules, it is its own rules engine.  You can compare the features of the two add-ins.

"Easy to buy and install. Does what I wanted. Still looking at different ways of using it!"
- Terry Ashton, Aberdeenshire, UK 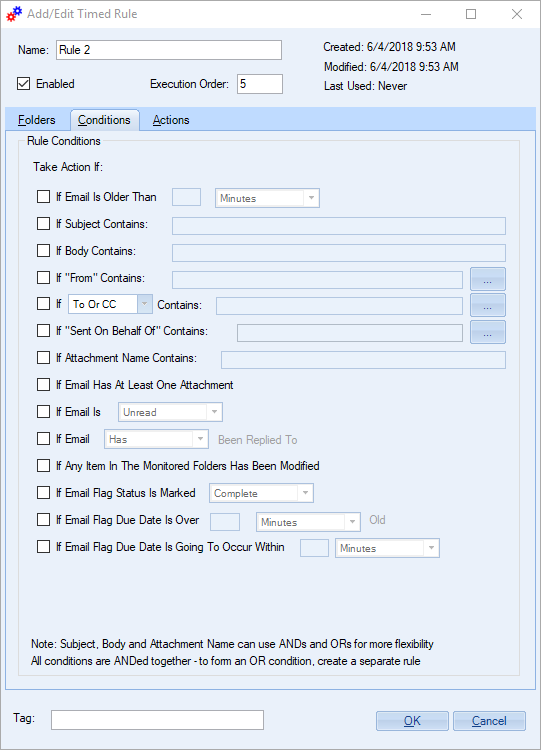 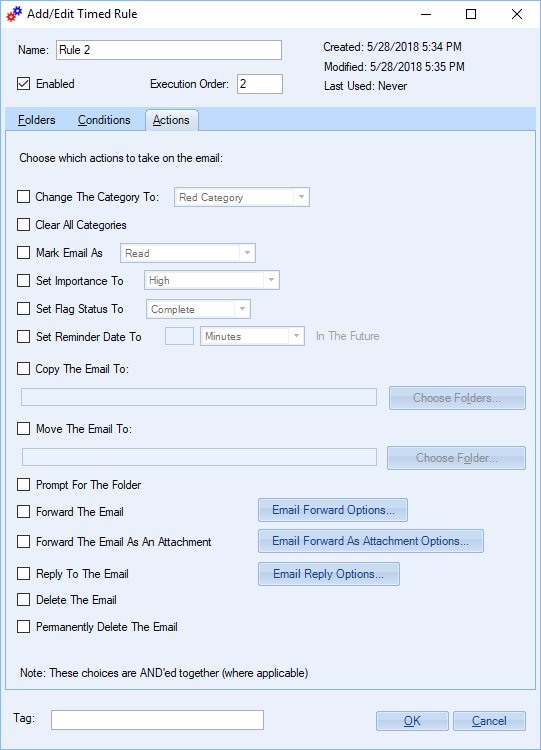 Here you can see the main grid with several rules, and a close up of the conditions and of the actions available to each rule.

All downloadable add-ins:
View the list of all our downloads (in alphabetical order)

The facility to test a rule means that you can set up a rule and then run it to see what emails would be affected. This allows you to hone your rule to include the exact conditions that you want without affecting any emails until you're ready.

It can also import your current Outlook rules if you're running out of rule space.

Note that Outlook must be up & running in order to have the rules process your email.